Cammie's original home was in the heart of the mountains in Southwest Virginia. She attended a traditional public school for most of her life, with the opportunity to attend Southwest Virginia Governor's School for science, mathematics, and technology as a junior and senior. She graduated from the University of Virginia with a BA in Environmental Science, a minor in biology, and a concentration in ecological and biological conservation. Her love of working with kids and belief that kids deserved better than what they were getting, encouraged her to get a Master's in Teaching in secondary science from the same university. During college, she was part of Alpha Chi Sigma (a co-ed chemistry fraternity) where she served in many roles that included Master Alchemist. She participated in concert and marching band. She worked as a water quality tester, a customer service representative, a tutor, and a dog trainer while attending classes and participating in university life. After graduation, she moved home, to start her career in public education.

After working in public schools for several years, Cammie started to research alternatives in education. She believed that student-led and student-driven education was the way forward, but found it incredibly difficult to implement in a system that was so focused on structure. The final straw was the formation of a 4-H club for her middle school. It was proof that students could enjoy learning when the options were meaningful and self-selected. When looking for alternative places of employment that fully embraced her view of education, she came across the Democratic School model. After much insistence from friends that she could in fact start her own school, she began the slow process of recruiting families. Her primary goal was to bring the Democratic School model to life at E.C. Stanton Community School and create a community of students and parents who enjoy living and learning together. She would ultimately like to help bring alternative forms of education out of the fringe and into the consciousness of parents, through the understanding that competition and documented success are the only ways to start changing public opinion on what is best for students.

Cammie thinks of herself as an 'amateur hobbyist' who enjoys learning new information and skills all the time. She hopes that she can bring her love of science, math, poetry, crafting, music, piano, flute, animals, Harry Potter, teen lit, and play to E.C. Stanton and allow it to draw students in and create a fun-filled learning community where students are engaged. She hopes to learn as much from teaching and interacting with the students as they will learn from her. 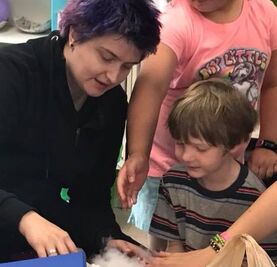 R grew up in DFW, and after being let down by the public school system, Self Directed home school from fifth grade on. As a child, Tricia spent most time reading and learning, or outside, and formed a passion for nature and animals. In the last year of high school, Tricia attended dual credit classes at TCC, and went on to graduate with an Associate of Science degree, and the credit for an Associate of Arts.

​R does not have any children without tails, but has a lifetime of experience working with children, from having a brother 12 years younger, to volunteering with Girl Scout troops and working at a camp, to currently running the nursery at UU Church of Oak Cliff.

Working with Girl Scouts also allowed R to pursue teaching certifications in interests like archery and canoeing. R enjoys learning and practicing a variety of arts, and sharing these experiences with students.